Thoughts that are popping into my head as I'm at work... I never really knew how to speak to people for a good portion of my life, but it was something I needed to learn in order to do my job at the shop. I've been kind of feeling like a robot in a way! It's a sort of weird way to describe it, but that's really exactly what it feels like... I have a bunch of "pre-programmed responses" in my head for customers (examples are like "do you need your receipt, have a nice day, etc." that I always use with the same inflection and tone for everyone, to the point it gets really repetitive if I have a line of customers! I feel bad because I don't want people to think it's a fake tone. Well, it IS kind of a fake tone because I don't generally speak with such expression in my voice, but for the most part I really do enjoy interacting with customers. I guess that's kind of a lucky part of my job... I only really get yelled at once in a blue moon, and it's almost always from someone out of town that I'll never see again, so I don't really care.
Anyways, where I was going with this was there's always kind of a "glitch" in the system whenever a customer asks me a question I'm not prepared for... it doesn't help that I'm horrible at processing words to begin with, so I generally have to ask them to repeat themselves. But any question or statement that I don't have an answer ready to go just somehow breaks the whole system! It's really annoying... I'm just not good at small talk with people I don't know personally. It makes me nervous since a good portion of the customers I interact with are 50 or older, so some of them can get pretty short-tempered with me (which is understandable I guess... I look like I'm sixteen, but I'm selling them weed and cigarettes so they should figure I'm at least 19 or older...) I don't know, it's a weird situation. I'm sure more practice with that sort of talk will just come with experience. I've only been working here for half a year or so, so I still need a lot of development in some places.
Wednesday, December 15th

My first entry! It's weird trying to get used to writing down stuff about my life, but I think the hardest part is starting. Today was a pretty eventful day anyways, so I guess I have something to write about at least!
I went to the city today for the first time in a while to visit with my boyfriend and best friend. I haven't been down in quite a while thanks to my busy work schedule, so I ended up spending a bunch of money while I was shopping! It's fine though, since I have some extra money after not having an opportunity to spend it for a while. I also had my Christmas exchange with my best friend since I won't be back to the city until after Christmas! 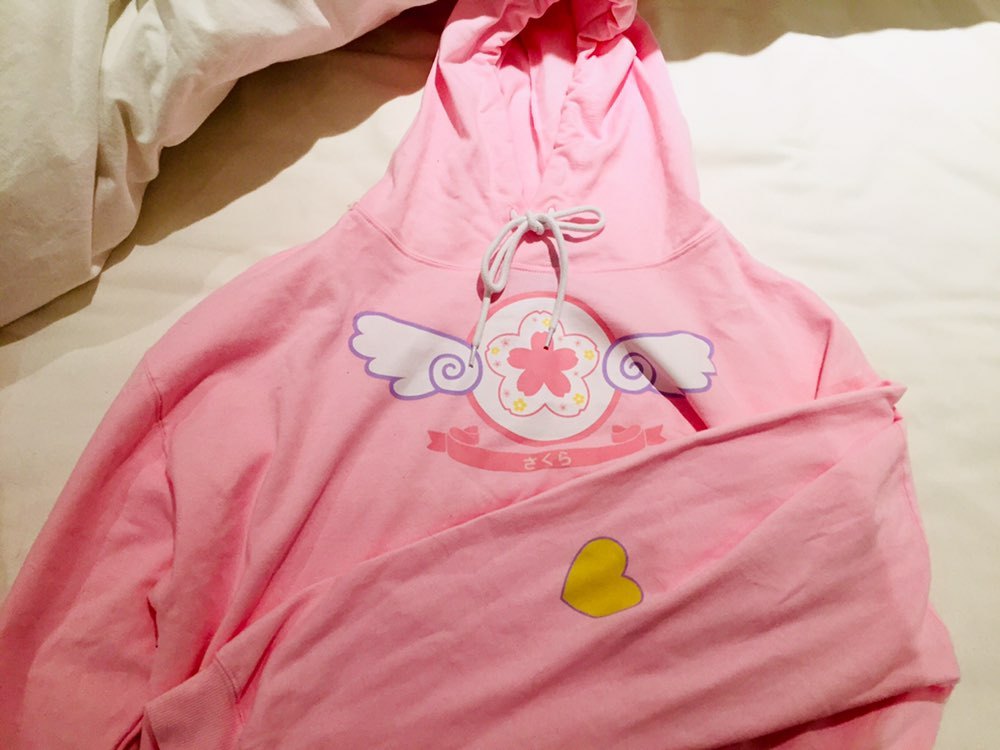 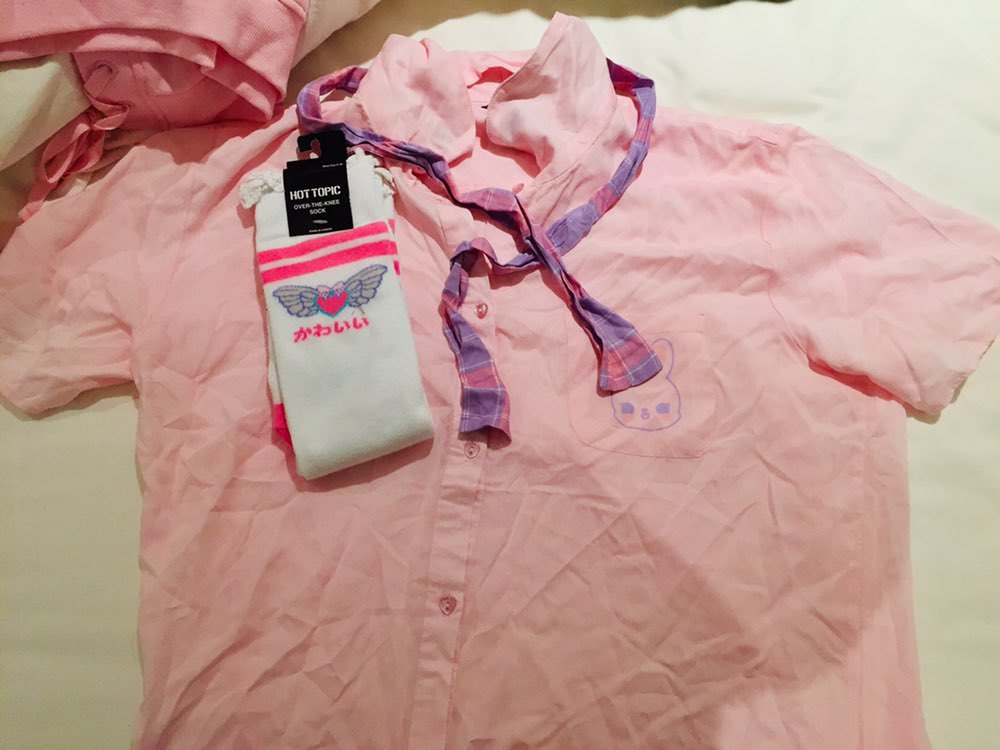 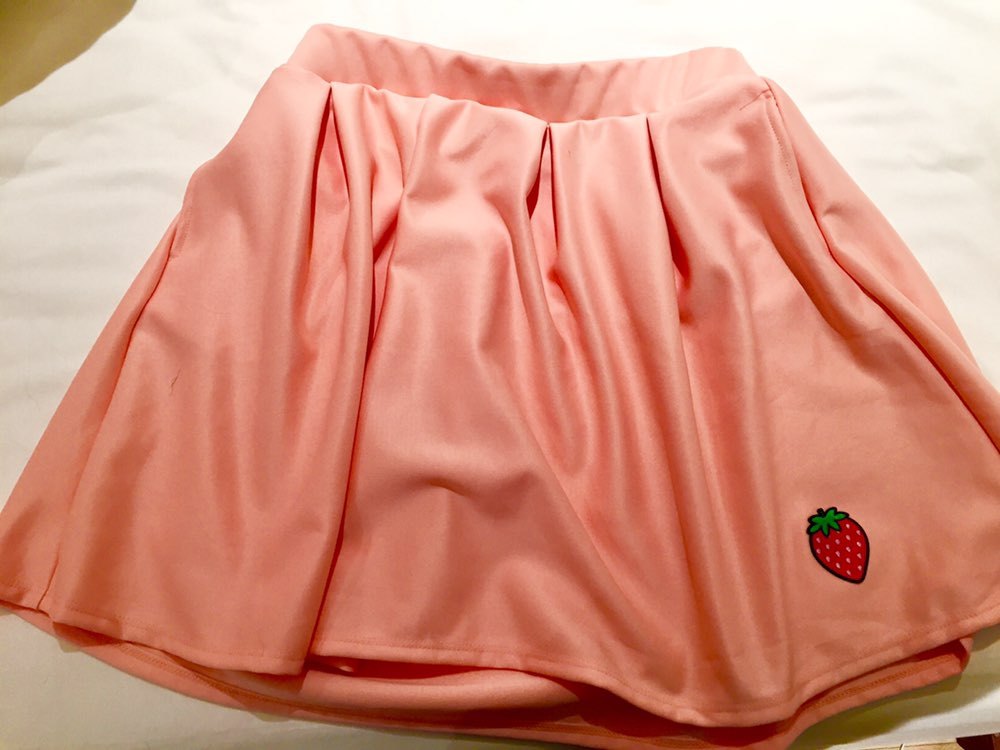 First off - CUTE CLOTHES!! I've been in need of even more pink clothes, and I can't wait to wear these brand new ones!! They're a little wrinkly because of how I had to store them on my way home, but one wash and they'll be ready to go! I really especially like the middle one - it has a sewn-on collar ribbon, I can't WAIT to tie it into a cute bow!! 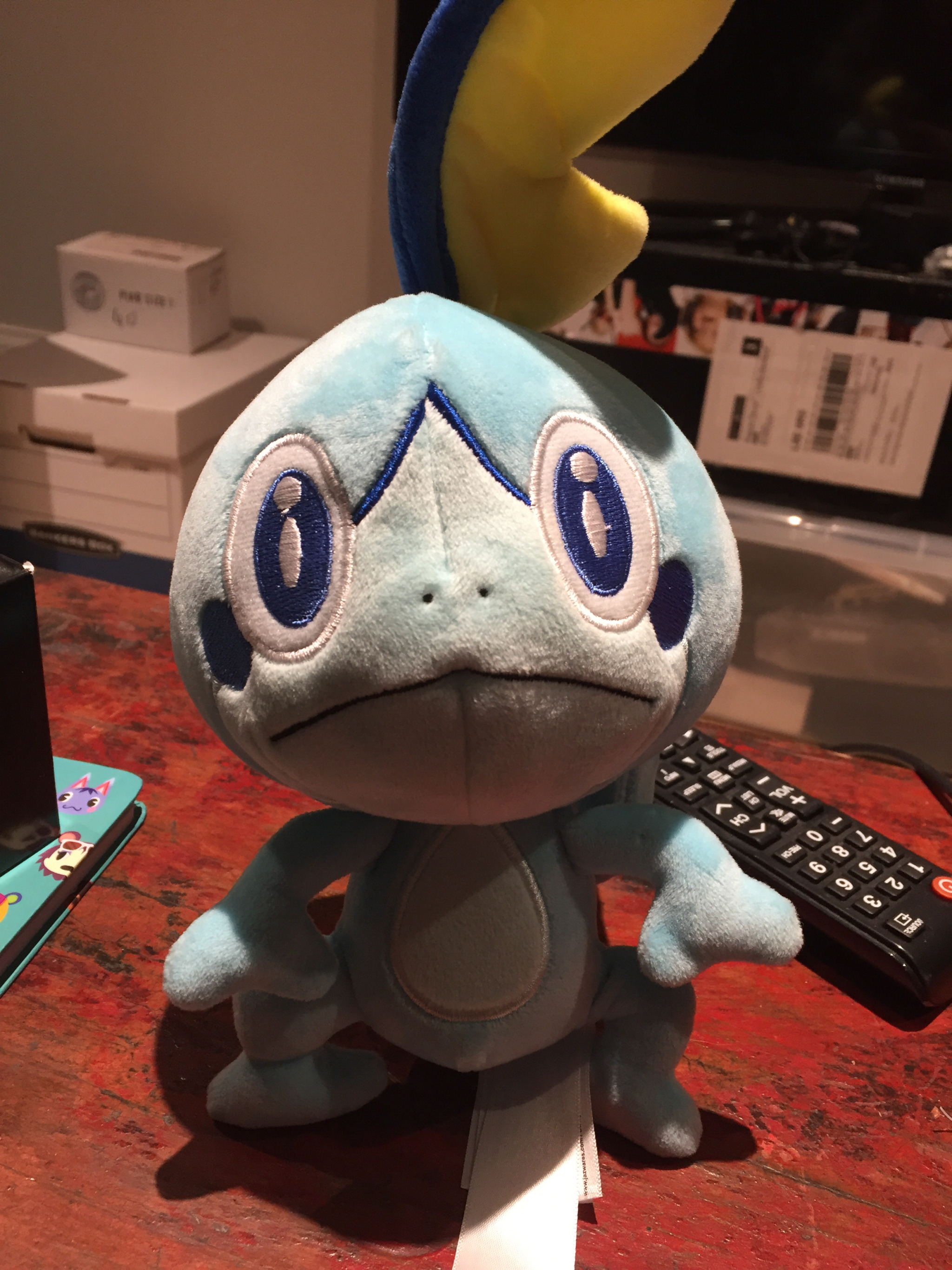 She also got me this adorable Sobble plush!! I actually wanted this specific plush since Sword and Shield first released, but all of my local Gamestops were out of stock of him - I have no idea how she managed to score this one, but I'm SO happy I can finally add him to my collection!! 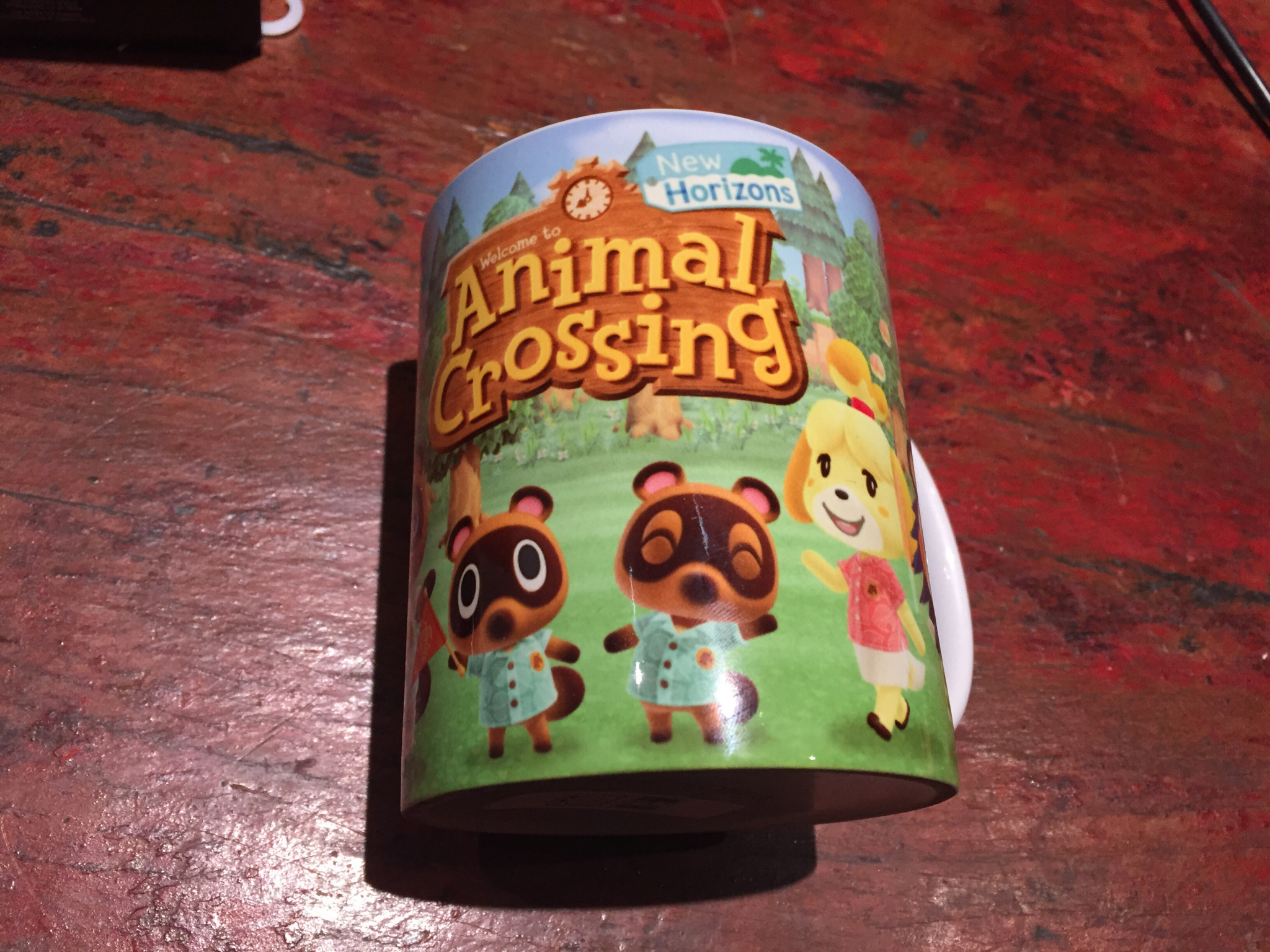 I also finally have a mug specific to me - this perfect Animal Crossing mug!! Even though my mom, dad and stepdad all had mugs that 'belonged' to them, for some reason I never had any. Now I finally do! I can't wait to make tea with this bad boy!! 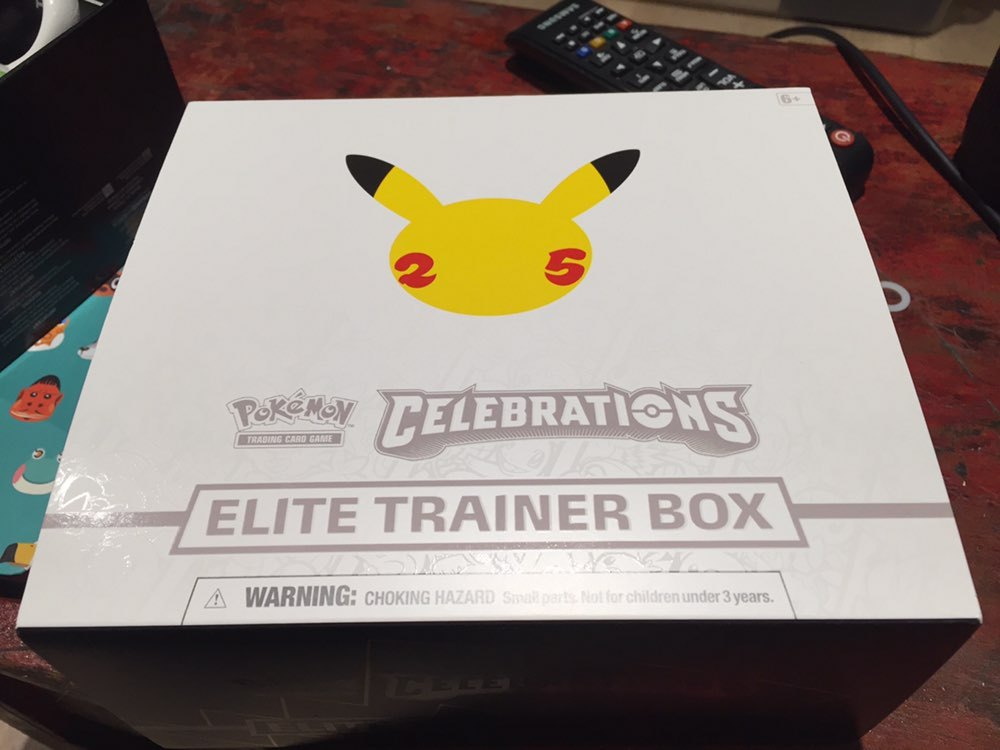 And the last thing she got me was the Pokemon Celebrations ETB!!! I got some super awesome pulls from it - this was my first ETB I've ever had!!! 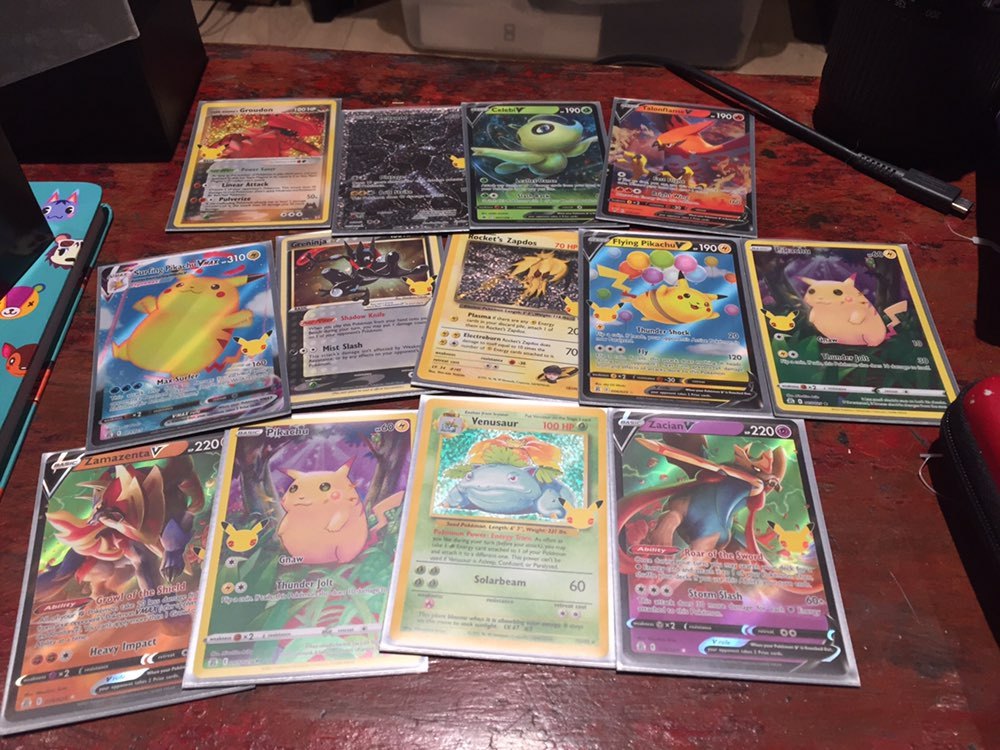 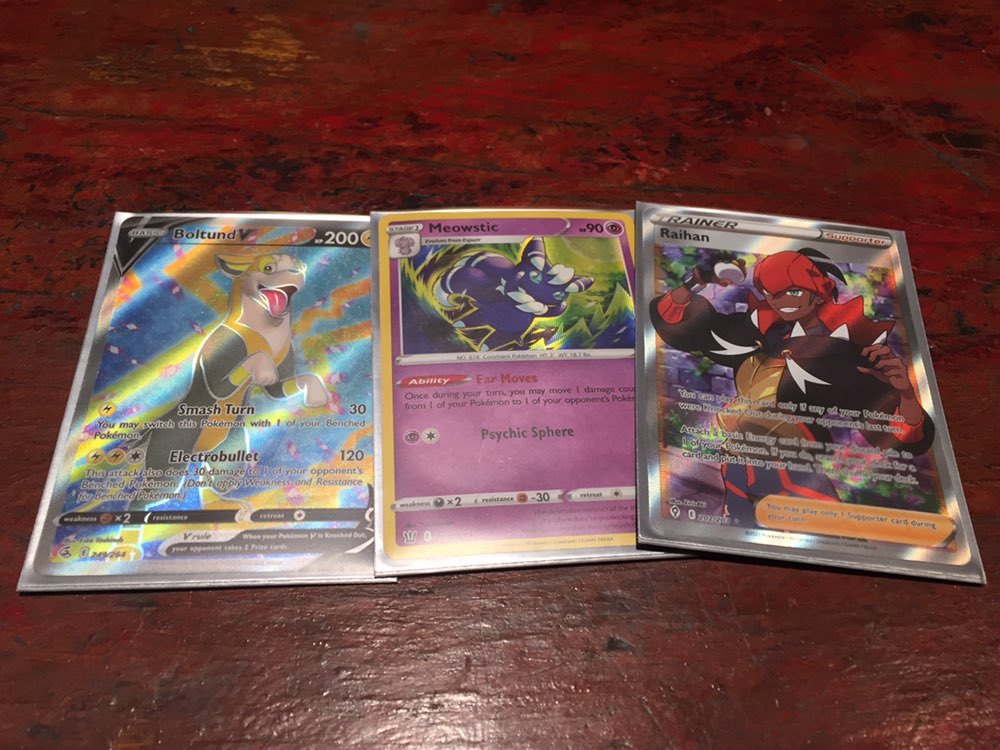 I also got these three cards! The Boltund was pulled by a friend of mine, and he saved it for me because he knows how much I love Boltund! The Meowstic was given to me by my best friend's little brother - my first ever successful Masuda method shiny was a shiny Meowstic that I treasure so much! And the Raihan was a single I purchased for myself. I ended up spending $36 dollars on him... but I knew how badly I wanted his card... 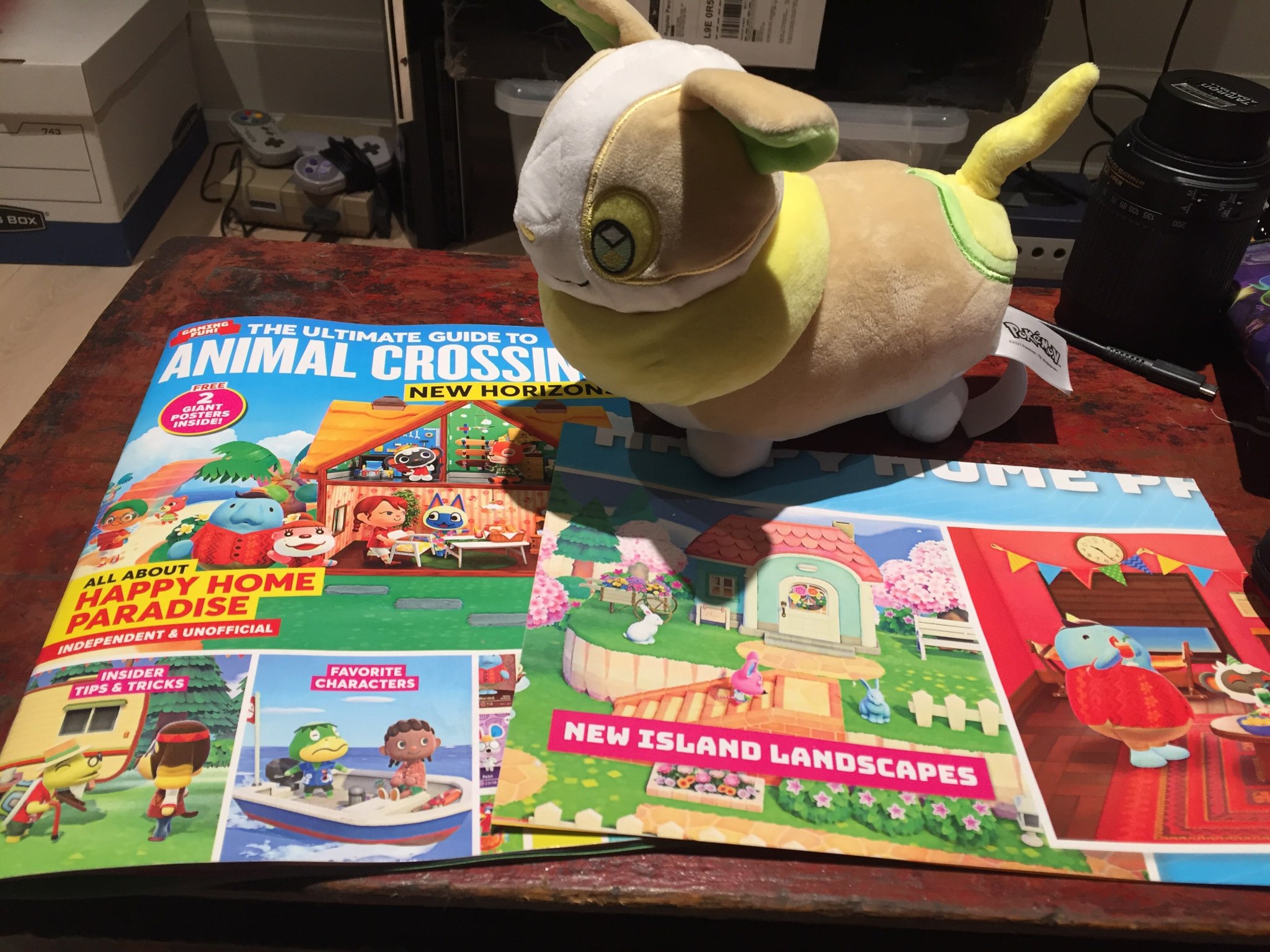 While I was out adventuring through Walmart, I also found this cute little Yamper plushie, and an Animal Crossing magazine about the latest update and DLC! I love these sorts of magazines, tbey give me such a nostalgic feeling, like Nintendo Power. Especially when they're unofficial, it's so fun to read stuff written by fans! It even came with a free Happy Home Paradise poster! Next I went to check out Gamestop, where I found this Animal Crossing notebook! I always say I'm going to use notebooks and then I never do, but I feel like this is one I'm definitely going to use. I'm not sure what for yet though... maybe lists or stories or something like that... 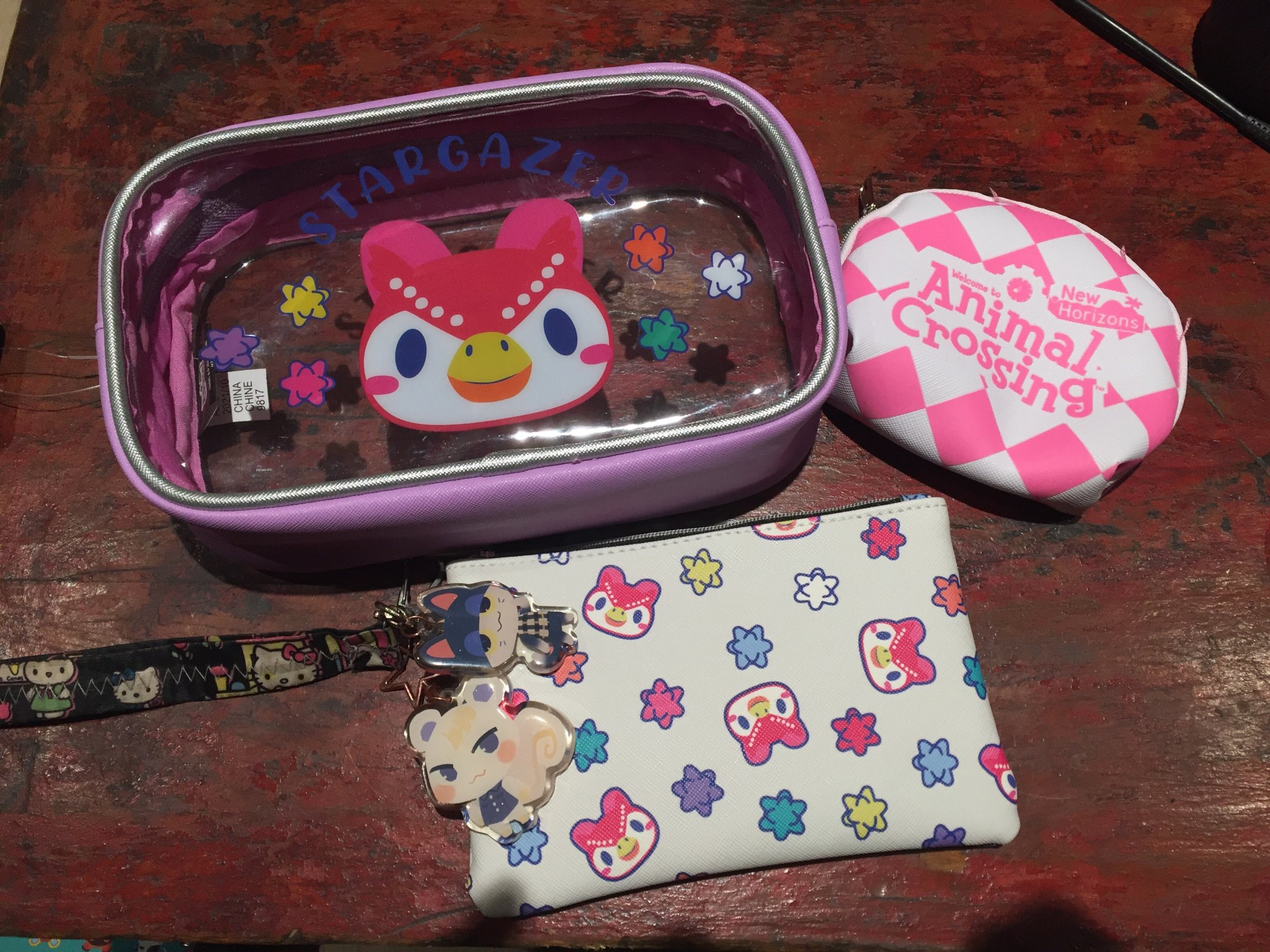 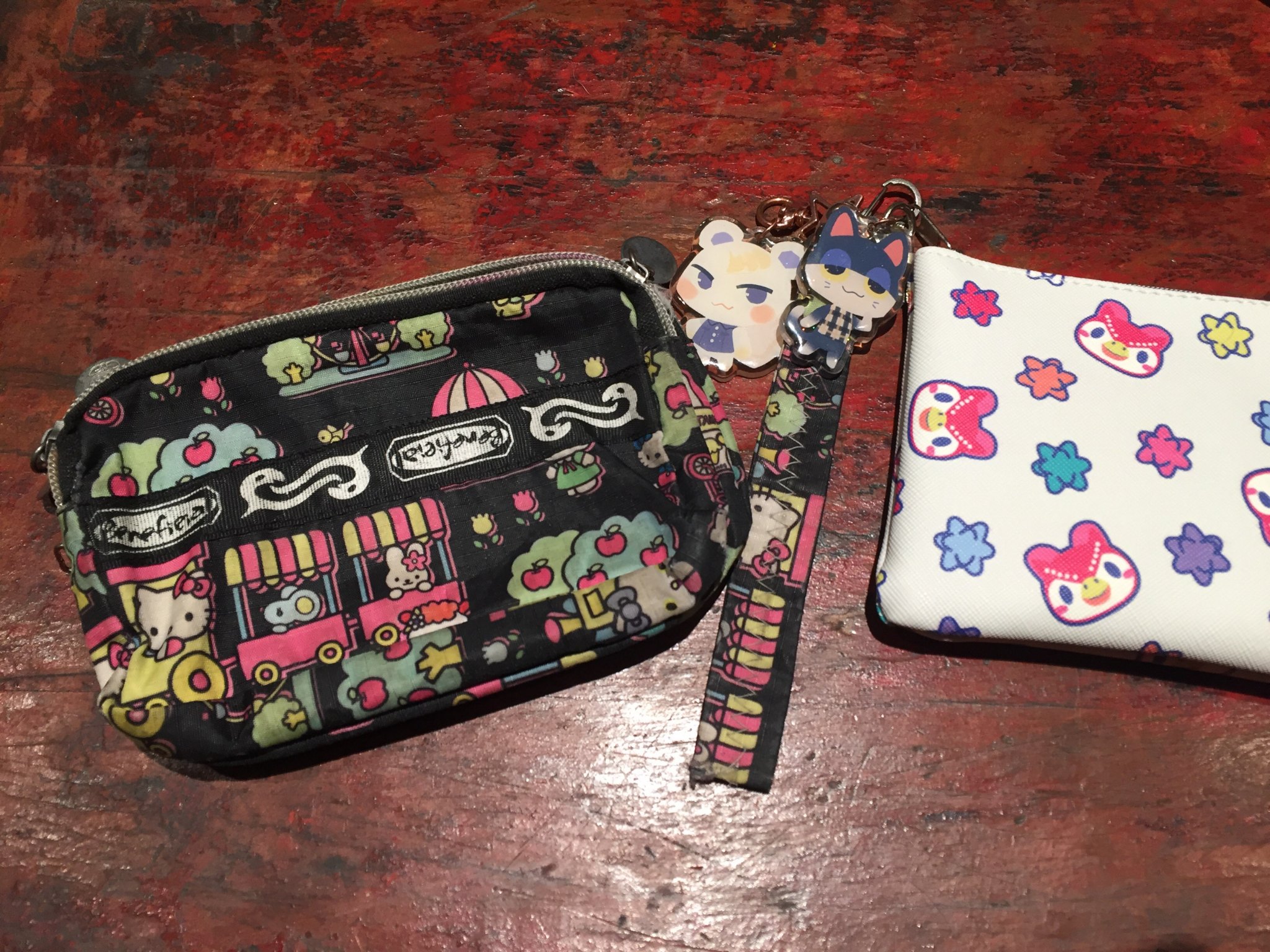 And I also found this adorable three pack of Celeste-themed bags! I plan to use the larger ones to carry my art supplies with me to work, and the other two will act as a wallet and a coin purse! I needed a new wallet anyways... my old one was extremely ripped and destroyed on the inside. I got it back in Hawaii in 2015, and I've never found anything like it again! It's super beloved to me, so I decided to take the strap off of it to put onto my new wallet as a little tribute to it. 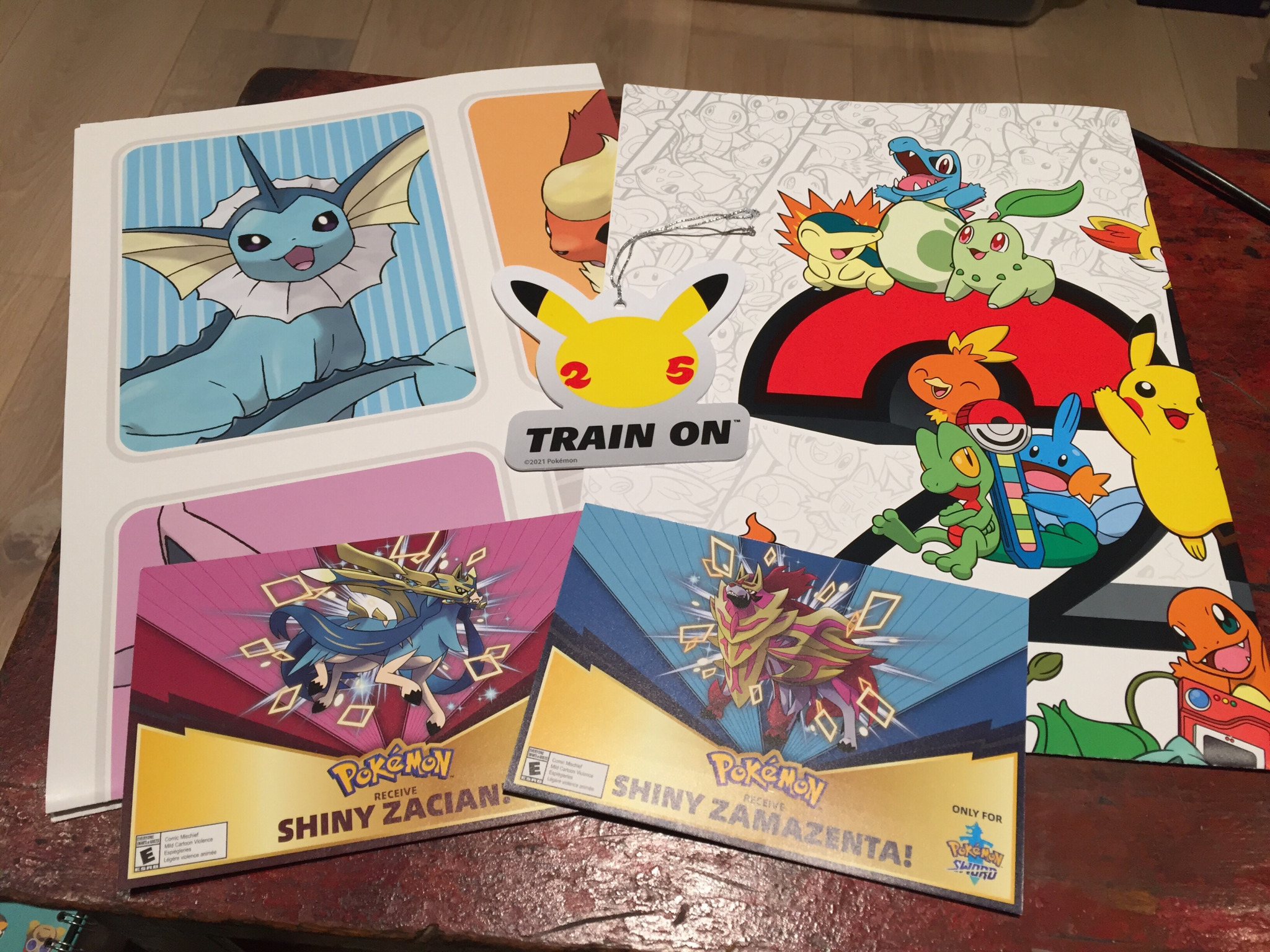 And lastly, I managed to get a couple freebies today too! The trading card shop had a few Pokemon posters and ornaments available for grabs, and Gamestop had codes for a shiny Zacian and Zamazenta! I really want the shiny Zamazenta - I LOVE its' colour scheme!

It was nice to just have a day to relax... last week, I worked a total of 56 hours, which was exhausting, and the week before was pretty similar in terms of hours. Even though I'm not handling customers all the time, it can still be really draining sitting in the shop all day, even if I'm playing video games or drawing. I definitely needed the week-long break I booked off! It's nice to see my friends again too, especially so close to the holiday season.
Christmas is only in a few more days... I'm so excited...!